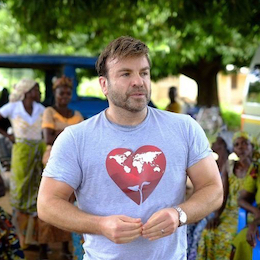 Mick Jackson is a serial entrepreneur, author and Ex Chart topping rock singer. He is also the founder of the WildHearts Group-a portfolio of companies committed to creating global social change. WildHearts is pioneering ‘Compassionate Entrepreneurial’ education in the ‘West’ through its multi-award winning training programme Micro-Tyco and funds micro- loans for poor entrepreneurs in 40 countries across five continents. To date, WildHearts have transformed over one million lives globally and invested over £20 million. Mick’s work has been recognised globally; he has received numerous honorary doctorates, was EY Entrepreneur of the Year in 2016 and was voted Top Scot by the UK public (an honour he shares with JK Rowling and Sir Chris Hoy). In 2015 WildHearts was voted Social Enterprise UK’s Social Business of the Year. Mick is the second only recipient of the highly prestigious Babson Social Innovation Award from the world’s top school in entrepreneurship.