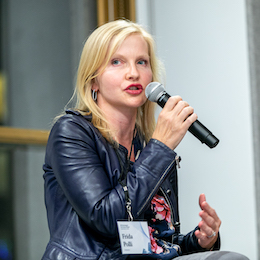 Frida Polli, PhD, MBA is an award-winning Harvard and MIT trained neuroscientist turned entrepreneur. She is the CEO and co-founder of pymetrics, a talent matching platform that uses behavioural science and AI to make workforce decisions more efficient, accurate, and fair. With global clients including BCG, Kraft Heinz and McDonald’s, pymetrics has matched hundreds of thousands of people with their ideal jobs, while removing bias from the process. Frida is a thought leader on the future of ethical AI and HR technology. She has been featured in and on CNN, BBC, CNBC, Bloomberg, the Wall Street Journal, the Financial Times, the New York Times, the Economist, Fortune, Forbes, and Inc, among others. She regularly speaks at events such as the WEF’s Annual Meeting in Davos, CogX, MAKERS, Collision Conference, Dreamforce, TechCrunch Disrupt, WebSummit, SXSW, and MIT EmTech Digital. Her publications include two dozen scientific articles in the Proceedings of the National Academy of Sciences, Brain, and Journal of Neuroscience, and popular press articles in HBR and FastCompany. She has appeared on lists including Inc’s Female Founders 100, Entrepreneur’s 100 Powerful Women, Fortune’s Most Powerful Women NextGen, and HRE’s Top 100 HR Tech Influencers. She has also won awards such as the MIT 100K Entrepreneurship Competition and Harvard Business School Life Science Award.